We Are Part of The Kingdom on Display

As the church, we are called to display the Kingdom of Christ to this world (that thought is fleshed out in more detail below).  One way that we, Dan and Shellie Hacker, are part of this is by serving at Redemption City Church, a Philadelphia Church Plant,  (redemptioncityphilly.com), in the Brewerytown neighborhood.  It has been amazing to be a part of what God is doing through His people!  The Spirit has been doing much to us and through us!  We have been so blessed to be with this church family since June 2017, and I (Dan) started a Church Planting Residency with RCC in January 2018, through Soma Sending, which is a 2 year program with Soma (wearesoma.com).

Through this opportunity we have been able to display the Kingdom in many ways on our block, in our neighborhood, and throughout the city!  We have seen the Spirit work in so many different ways while we have been a part of the RCC family!

Go to our ‘News’ page to read in depth details of what God has done to us and through us.

17 Therefore, if anyone is in Christ, he is a new creation.  The old has passed away; behold, the new has come. 18 All this is from God, who through Christ reconciled us to himself and gave us the ministry of reconciliation; 19 that is, in Christ, God was reconciling the world to himself, not counting their trespasses against them, and entrusting to us the message of reconciliation. 20 Therefore, we are ambassadors for Christ, God making his appeal through us.  We implore you on behalf of Christ, be reconciled to God. 21 For our sake he made him to be sin who knew no sin, so that in him we might become the righteousness of God.

How Do We Display The Kingdom?

God created the world as recorded in Genesis, but because of sin entering into this world (Genesis 3), it is now the Fallen Kingdom (left circle).  The created world was tainted by the Fall of Adam and Eve.  It is unfortunately now filled with sin, death, and all characteristics of Satan, like hatred and evil .  This is current state of the world, but this is not how it was supposed to be.

Christ’s Kingdom (right circle) is the Kingdom that Jesus established when he came to this earth.  That Kingdom is full of righteousness, and life!  All authority in heaven and on earth has been given to King Jesus (Matthew 28:18)!  Those who believe in Jesus as Savior and King are part of this Kingdom, and it will be fully established when Jesus returns (Daniel 2:44)!  This Kingdom is led by the rule and reign of Christ breaking into this world, ever expanding, always growing through the church, who are to proclaim and live out the Gospel, seeking to display Christ’s Kingdom in word and deed (as His children are ambassadors of this kingdom; 2 Corinthians 5:20). 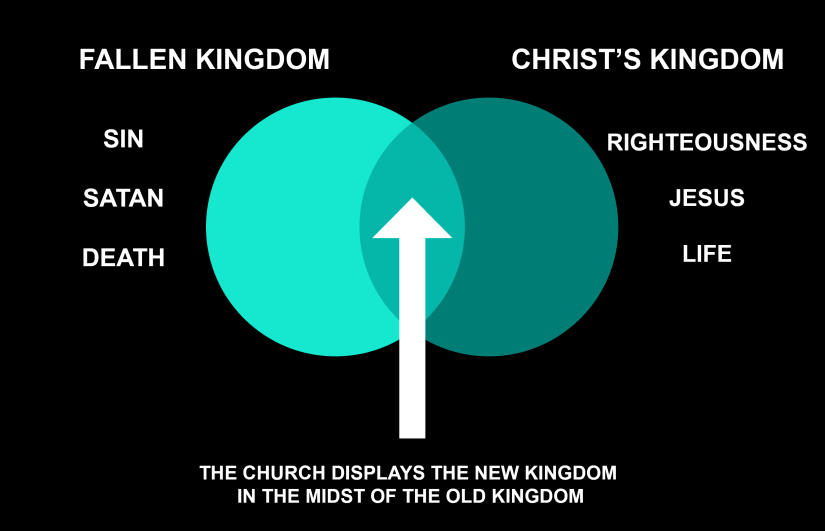 We live in the overlap of these 2 Kingdoms (see figure above, designated by the arrow).    We look toward a restored world, and we want to be witnesses of that, right here in the center (as pictured in the graphic above).  We as the church, through the power of the Spirit are to bear witness of the love that can only be found in Christ’s Kingdom.

It is though the Spirit dwelling in us, that we are now God’s sent ones.  The church exists as a missionary people in this time in history, to witness to those who do not know Him yet, so that all may see what Christ’s Kingdom is and what it is like.  We are sent by the King to make the New Kingdom known, being empowered by His’s Spirit to do this!  As the Spirit has entered into us, we are to enter into the world.

We are to live WITH God’s people, FOR other people (those who do not know Jesus as their Savior yet).  As the church, we are to give ourselves to each other, as a Family of Missionary Servants, who love, nourish, encourage and strengthen each other.  A beautiful picture of this can be seen throughout the book of Acts.  One example is in Acts 2: 42-47:

42 They devoted themselves to the apostles’ teaching and to fellowship, to the breaking of bread and to prayer. 43 Everyone was filled with awe at the many wonders and signs performed by the apostles. 44 All the believers were together and had everything in common. 45 They sold property and possessions to give to anyone who had need. 46 Every day they continued to meet together in the temple courts. They broke bread in their homes and ate together with glad and sincere hearts, 47 praising God and enjoying the favor of all the people. And the Lord added to their number daily those who were being saved.

We are called to be The Kingdom on Display!  Everyone we serve in our communities/neighborhoods get a taste of this when we love them.  They get a glimpse of the established Kingdom of Jesus when we display His Kingdom.

Whatever He has done to us, He now wants to do through us!